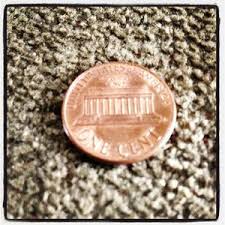 Digging for keys, I felt around in my purse for the fob and yanked it out, with a frustrated force that usually accompanies this search. As the keys popped out, a loose penny escaped as well, hurling itself toward freedom. The penny remained airborne for at least a foot before landing on the concrete parking lot and rolling toward the curb. I stooped to pick it up but decided, instead, to leave it for someone to find, a little surprise luck for the day.

The newly sprung penny landed with its tail on top. Some folks only pick up a found penny if it lands heads up. I pick up every penny, heads or tails, believing it’s lucky just because I found it. If I find a dime or a quarter, even better; ten or twenty-five days of good luck! I love finding money lying in wait for me on the ground. Once I found a fifty dollar bill. That’s a lot of lucky days!

Some people believe finding a penny is a sign from a lost loved one in another dimension. In my song, “Shadow,” I wrote this lyric: “When I’m alone are you with me, dropping a penny for thought?” We miss our loved ones and want to feel a connection, even a symbol as small as a penny.

After my adult son died from a brain tumor, I felt lost in grief. Walking became a survival tactic, forcing me to get up, go outside, and keep moving. I would spend that time thinking, or not thinking at all, or crying. I randomly walked my neighborhood, turning a corner on a whim or because I saw another human I hoped to avoid. One time, very soon after my loss, I set out for a walk and within a few blocks of my house, a little boy ran up to me out of nowhere. He proudly handed me a slightly wilted flower picked from the yard. Whether it was a sign from my beloved son, or just an innocent little boy waiting for someone to happen by, who knows. But, the gesture touched me and meant so much in the context of my recent loss.

When my dad died at age 66 from heart failure, I felt relief. His alcoholism strained our relationship for over 30 years. I worried constantly that he would hurt someone, or himself. In the final years of his life, my dad’s favorite hobby became feeding birds in his backyard. After he died, I realized I thought of him every time I saw a bright red cardinal. Now when I see one, I say, “Hi, Dad!” Sometimes a cardinal sits in a bush outside my living room window, and I like to think my dad is checking in on me. This pretty bird has become a healing connection between us.

According to some spiritualists, if we pay attention and watch for them, signs are everywhere to help us navigate through life. Did you hit every red light on the way to wherever you’re going? Take a breath and slow down. Flat tire on the way to a date or job interview? Maybe it’s not the one for you.

A few years ago a new friend – and potential suitor – invited me over for dinner. That evening, as I drove to his house, a big truck sideswiped my car, ripping the driver’s side mirror clean off. Upon arrival I was a bit shaken, to which my spiritually minded dinner date said, “Do you think this is some kind of sign”? During dinner I learned that this man had the same birthday as my recent ex-husband. Later, he told me, “I think I should tell you that I like to date a lot of women.” Good to know. Three warning signs = no thanks.

As you travel on your daily journey, whatever the token or thing might be that prompts a memory, provides joy or comfort, or opens your eyes, I hope you see it. If you’re anywhere near the parking lot just east of the Fine Arts building at The University of Missouri-Kansas City, there’s a shiny penny waiting to be found!

P.S. You can read about animal symbolism and seeing things a different way in my recent essay, “Changing My Attitude.”